This Friday, June 15th, People Magazine’s first “Real Weddings” edition hits newsstands. Why should you care? Because WE’RE IN IT. Apparently good things come to those who post ridiculous wedding dances on youtube. 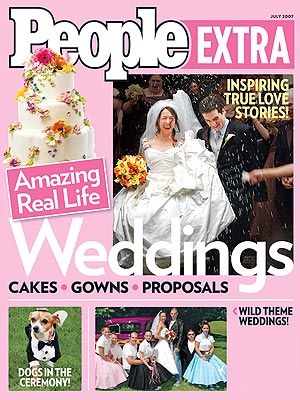 But that’s not all! The CBS morning show is doing a segment on the magazine on Tuesday, and they apparently intend to show the video clip itself.

In other news, Scott’s dad came for a short visit in early May, followed a few weeks later by Katie’s sister, Tracy. Everyone seems to approve of the apartment, except possibly the cat.

For Memorial Day weekend, we drove up to Ashland, OR (about halfway between San Francisco and Portland) and met up with Katie’s parents. Katie and the old folks enjoyed the Oregon Shakespeare Festival’s production of As You Like It, but would have liked it more had Scott not had to stay behind in the hotel, sick.

We’re hoping to get back to Pittsburgh in July for our first anniversary, if for no other reason than to finally eat the cake that’s been taking up space in Beej’s freezer since we moved. Honestly, I don’t think either Scott or I got more than a bite at the wedding…hopefully that mango filling is still good a year later.

He left for work with a folder full of paperwork, and came home with an armload of Sims 2 Expansions!

Also in this photo: the view from our second-floor apartment, and an angry looking Princess.

Alive and Well and Living in Belmont!

We arrived safely in (sort of) sunny California on Wednesday evening, after four days of travel on I-80. Not much to see, not much to report. There were a few patches of bad weather in Ohio and Wyoming, but luckily we came out unscathed.

Thursday we visited a number of apartments in the Belmont/San Carlos area, and settled on the first one we visited. We turned in the application and paperwork; now we’re just waiting for approval to take possession this weekend. We’ll send pictures when we actually get into the place.

Thanks to everyone who helped us pack, took our unwanted junk, and kept us in their thoughts as we drove cross-country. Especially you, Corn Dog.