Now that the inaguration is over and everything interesting that was going to happen this winter has already happened, it seems time to update the ol’ blog.

First the big news: we’re officially homeowners! We moved in on October 30th, just in time to stock up on Halloween candy for neighborhood trick-or-treaters. Unfortunately we got home from work too late to actually hand out any candy.

November was a blur of unpacking and preparing the place for our very first house-guests. Scott’s parents spent a long Thanksgiving weekend with us here in San Leandro, and we all enjoyed a traditional turkey dinner with friends. 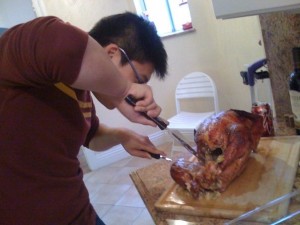 When Thanksgiving and all our visitors had gone, we lost no time preparing for the next holiday. After a quick trip to Orchard Supply Hardware to procure a ladder and some lights, we climbed up on the roof and did some decorating: 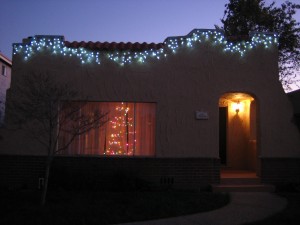 The next weekend we drove down to Los Gatos to cut down our first real-live Christmas tree. Apparently noble firs don’t grow down here, so we opted for the local variety, a redwood: 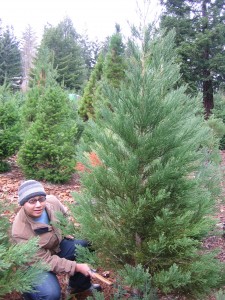 When Christmas finally arrived, Scott got a little surprise under the tree: 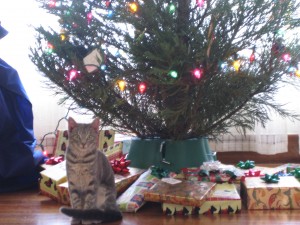 Her name is Daisy, and no, she didn’t really sit calmly under the tree for more than about 30 seconds. We actually picked her up on Christmas Eve from the local PetSmart where an animal rescue group does pet adoptions. Now Princess has a friend…or an enemy…or just someone to chase around the house while we’re at work all day.

The day AFTER Christmas, the Dahl clan descended upon San Leandro. Katie’s parents and brother flew in from Portland that morning, and sister plus boyfriend arrived from DC that evening. The next day was our pseudo-Christmas, complete with gift-exchange, another turkey, and of course, a huge mess after it was all over: 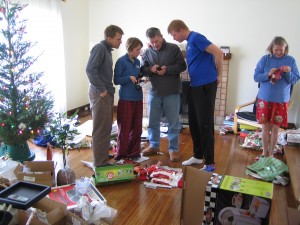 The family stuck around for a few days, but by New Year’s everyone had retreated back to their respective hometowns. We celebrated the New Year here in the Bay Area with friends, but apparently without a camera.

2009 has been relatively uneventful so far. If anything else interesting happens maybe we’ll post again…in the meantime, cheer for the Steelers, and admire our adorable kitten: 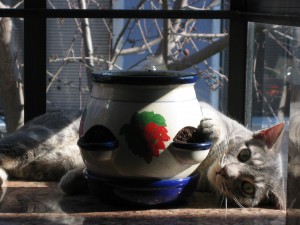 There are few times in life…